Joined Sep 9, 2012
·
713 Posts
Does anyone know if there is a replacement switch for the Lucas switch that comes with the kit? Would like it to be a standard metal toggle. The main reason for wanting a replacement, besides wanting it to match the other switches, is that the Lucas switch provided does not have enough threads to reach through the dash, and be able to be secured with the mounting nut. I am also using dash labels that fit around the stem, which is just compounding the situation.

Grainger has a wide variety available.

Joined Sep 9, 2012
·
713 Posts
Hey Bill, do you know if that type of switch will handle the "park" situation that is built into the Lucas switch, or do you just have to have quick reactions and switch off at the bottom of the sweep? Also, would you have any idea of how to connect up the wires in this situation?
I am so bad at the electrical that it is causing me to doubt myself, and question every choice I'm making. There are so many things that I have questions on that if I started typing now, I might get all the questions entered by sometime around Halloween!
Thanks,
Rick
► Show Full Signature
Rick

My wiper set up is the simple one, using an on-off-on toggle switch. The switch center position is off, down slow, up fast, (You could also use an on-on-off one if you wished.)

I didn't bother with the park aspect. It's easy enough just to flip the switch off, when they are at the bottom of the sweep. Wiring it that way, is also very simple.:smile2:

Now that being said, one can wire some of the FFR wiper motors, (not the early one apparently), using a Lucas L-35927 switch, (or equivalent one), to avail the park feature. I question though, if that Lucas switch will have a long enough neck, to suit your thicker dash. There is also a female connector plug that can be purchased optionally, designed to suit the motor. Both are shown here.

EDIT- Make sure Finishline is still in business, if you decide to order anything from them. One forum member was concerned, as he'd already paid for something, and had not rec'd it, or heard anything further from them..
► Show Full Signature
Love at first bite! FFR6803RD, MK 3.1, 302EFI, fr/rr disc brakes, WC-T5 c/w Hurst Short Shifter, 3 link, Koni coil overs, dual roll bars, BBK 4-4 headers, 3.55 rear, BBK rr lower control arms. Ivy Green Metallic. Officially on road 09/2010
E

Joined Sep 9, 2012
·
713 Posts
Hey Bill. Thanks for getting back to me. I was kind of figuring that as often that I will be using the wipers, (probably never), just switching off at the bottom of the sweep would be the easiest solution. Unless someone gets back to me with a wiring method to use a standard on-off-on switch, and still keep the auto park option.
Regarding Finishline, I just responded to the Finishline thread. I only live about 15 miles from them, and the Cobra museum in Martinez, CA. In just the past couple of weeks I ordered parts, and received them in less than a week. Oddly enough, one of the parts was the wiper motor plug! Also bought the wiper motor pad, since the clamp that came with the kit would not tighten the motor down to the firewall. The pad works great. Haven't installed the plug yet
Thanks

That is what I've done. I'm not on the road yet but it has worked well on the bench. In addition, you can make an original style knob work with a bit of modification. It also works with a windshield washer by pushing the knob in to activate it.

I've written about this before but I don't believe anyone else has done it.

Joined Sep 9, 2012
·
713 Posts
Brastic, thanks. I'm not in a huge hurry. My progress is similar to watching a glacier move. I'd be interested in your results.
George, I saw those online, but didn't know if they would work. Do you know if they have one that doesn't include the washer? If they do this could be a winner! I always felt living in the SF Bay area, intermittent wipers would be a great add.
Thanks guys.

GWL said:
PM me with your email for pictures of my knob if you want. George
Click to expand...

EZ$ said:
Pictures of your...what!! Just kidding. Besides, I believe I've seen pictures of it on the internet > 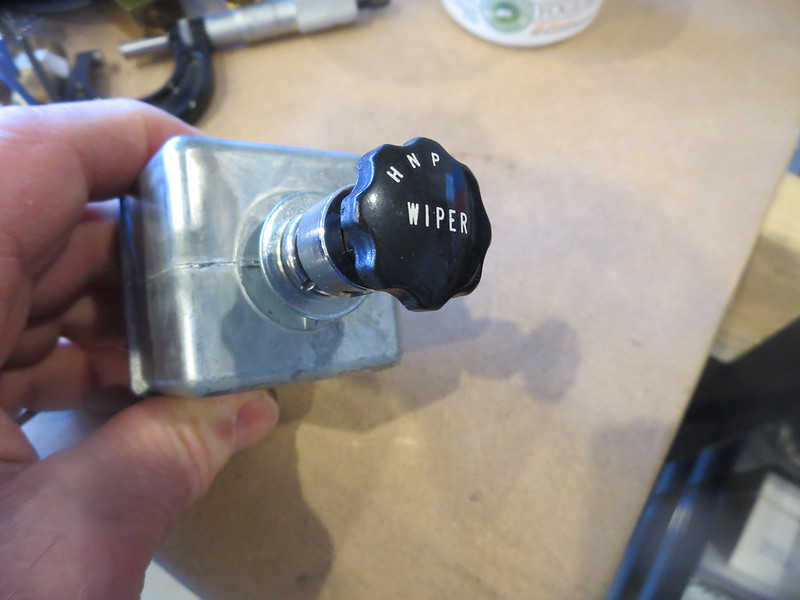 The only distracting factor is the collar I had to fit at the base of the knob to keep it from splitting.