I started by inserting a screw into each hole in the hat and running them down until they just barely touched. This cleaned out the threads. After removing the screws, I installed and torqued all the bolts to 130 inch pounds without the Loctite. Then I loosened one bolt at a time, applied Loctite (red 271) and torqued the bolt to the final 155 inch pounds. The instructions said to tighten bolts in an alternating pattern, so I tightened North, South, East, and West, then rotated the assembly to put an untightened bolt at North. After each bolt was torqued, I painted it with nail polish so I could keep track of what I had done. Three rotations and I was done with all 12 bolts and could move to the next assembly. 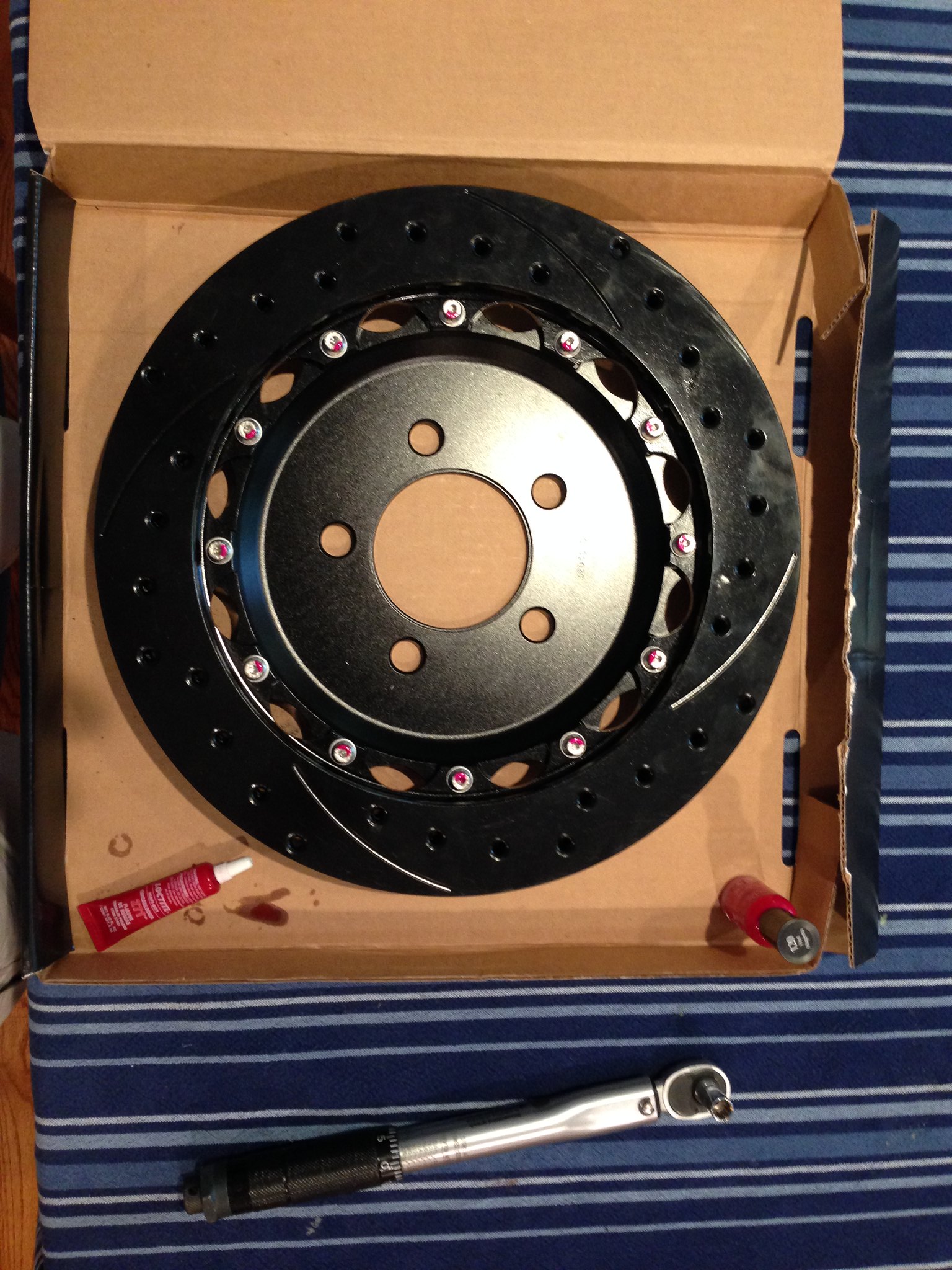 Regarding safety wire, howardsoflang says “I spoke with the Wilwood tech guys about safety wire vs red Loctite vs both. The response was.... Unless you are doing all out hard core racing, you don't need the safety wire. Red Loctite will suffice. I followed that and torqued to 155 inlb. I drove the car for 18,000 kilometers then decided to change the rotors for the drilled units. The hat bolts were all still tight. In fact, during a lapse in concentrating on what I was doing, I snapped off two of the hat bolts. Had to drill and use a small bolt extractor.
The point is, for street application the red Loctite is more than satisfactory.”

Since I’m a belt-and-suspenders kind of guy - and I want to learn how to safety wire - I’ll safety wire these bolts later.

Joined May 17, 2012
·
705 Posts
Your missing all the fun of getting safety wire stuck in your fingers ... Blood mixing in with the red locktite.

You guys are hilarious.

On the Driver’s Side, one of the mounting brackets was too narrow to fit the bushing between. I expected to find at least one bracket that was too narrow based on all the forum reading I’ve done for the past three years. No big deal; I’ll get some all-thread and a couple of nuts to expand the bracket.

On the Passenger’s Side, the control arm did in fact fit between both brackets. However, the bolt holes on the brackets are not big enough to allow the bolt to go through. This is probably just the powder coating being just thick enough to prevent the bolt going through. Again, no big deal; I’ll just use a sander attachment in my drill to roll out the hole (and if that doesn’t work, I’ll use an old beat-up drill bit to re-size the hole).

No pics, since nothing happened.

Joined Jul 12, 2014
·
1,147 Posts
Today I think I fixed the issues that prevented me from mocking up the lower control arms.

The first order of business was sanding out the bolt holes in the mounting brackets. Before I started, I could only get the bolt in this far: 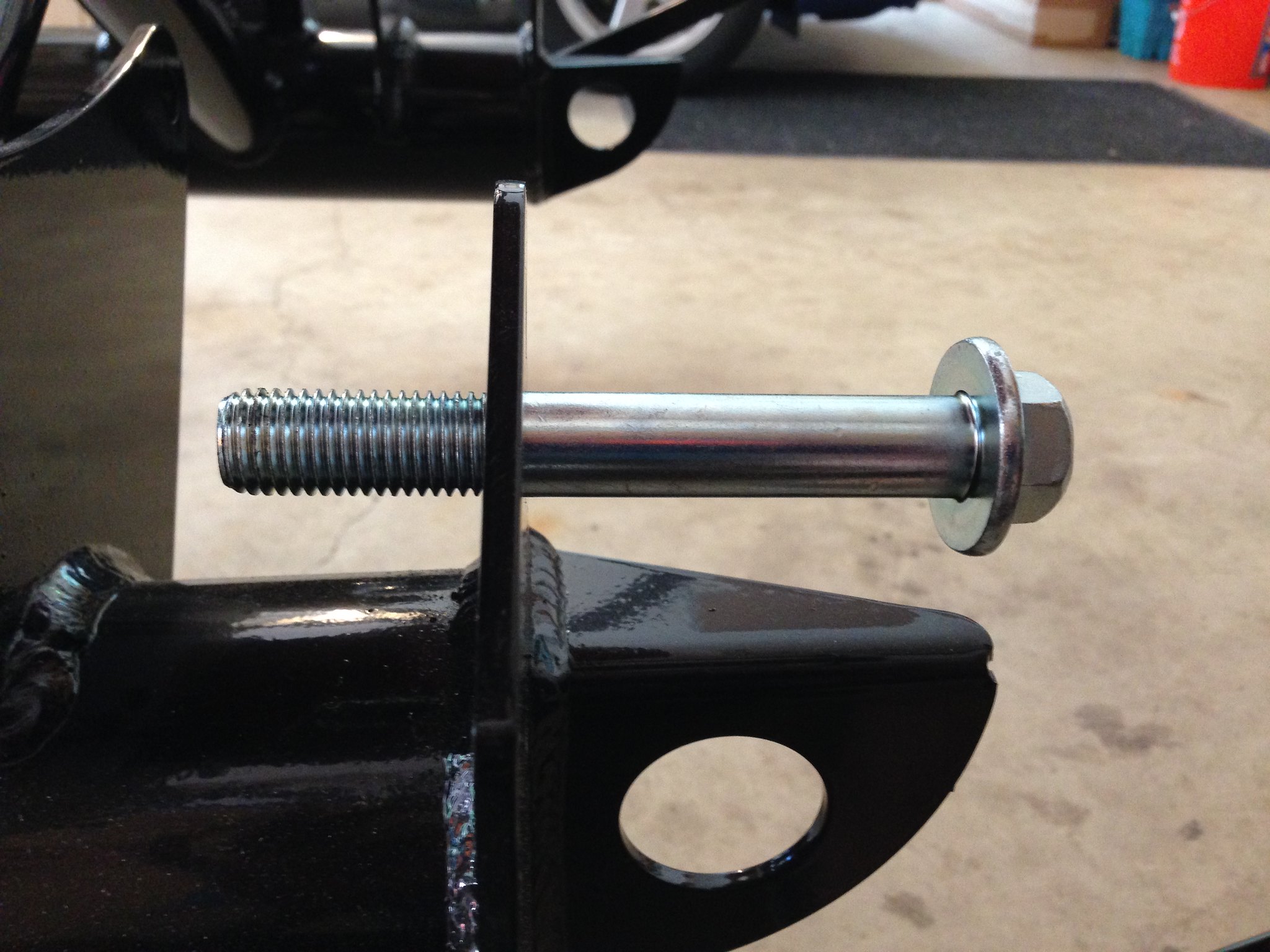 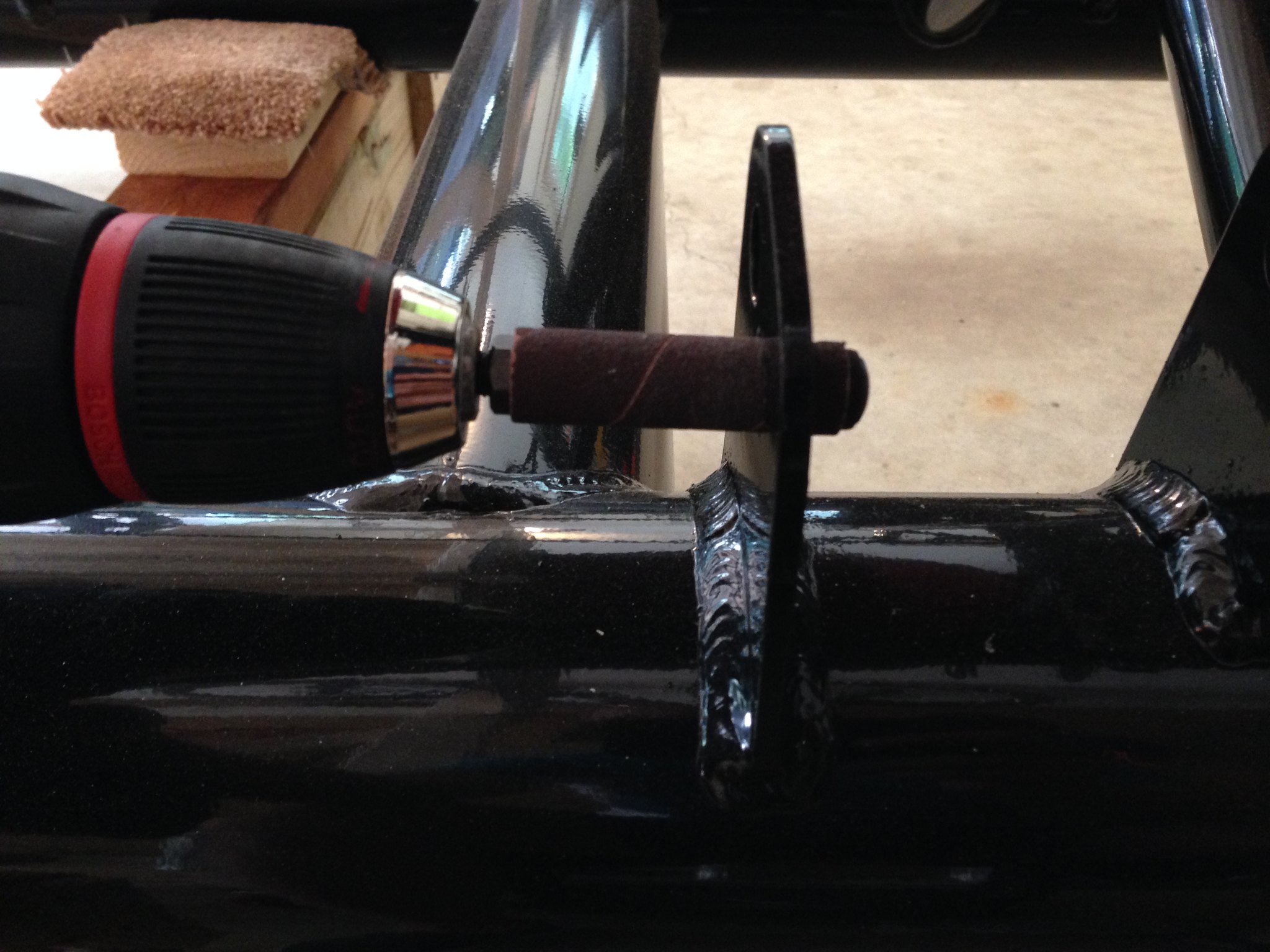 I was able to insert the bolt properly: 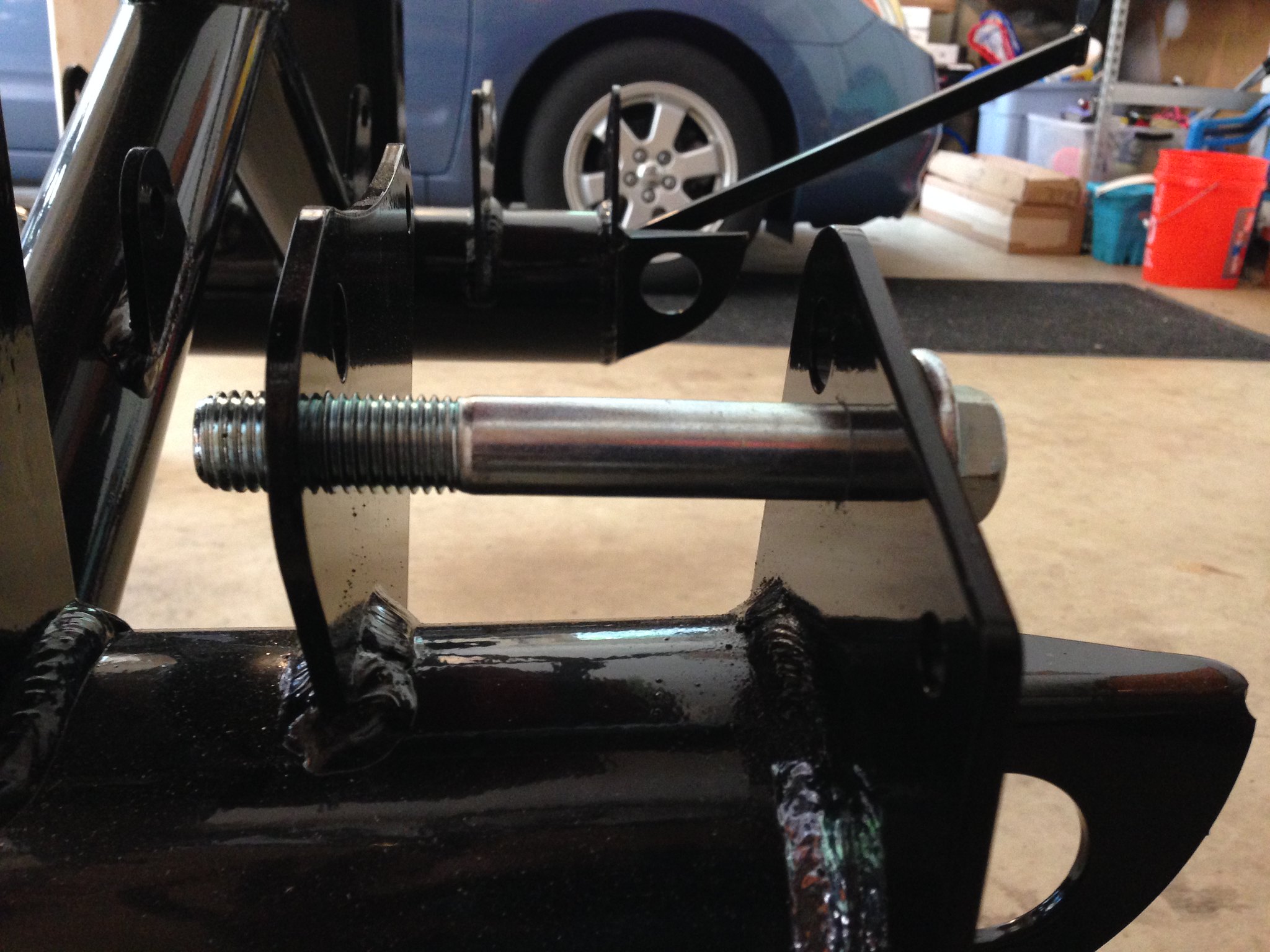 Next, I spread the forward Driver’s Side mounting bracket. I set up my all-thread, nuts, and washers like this: 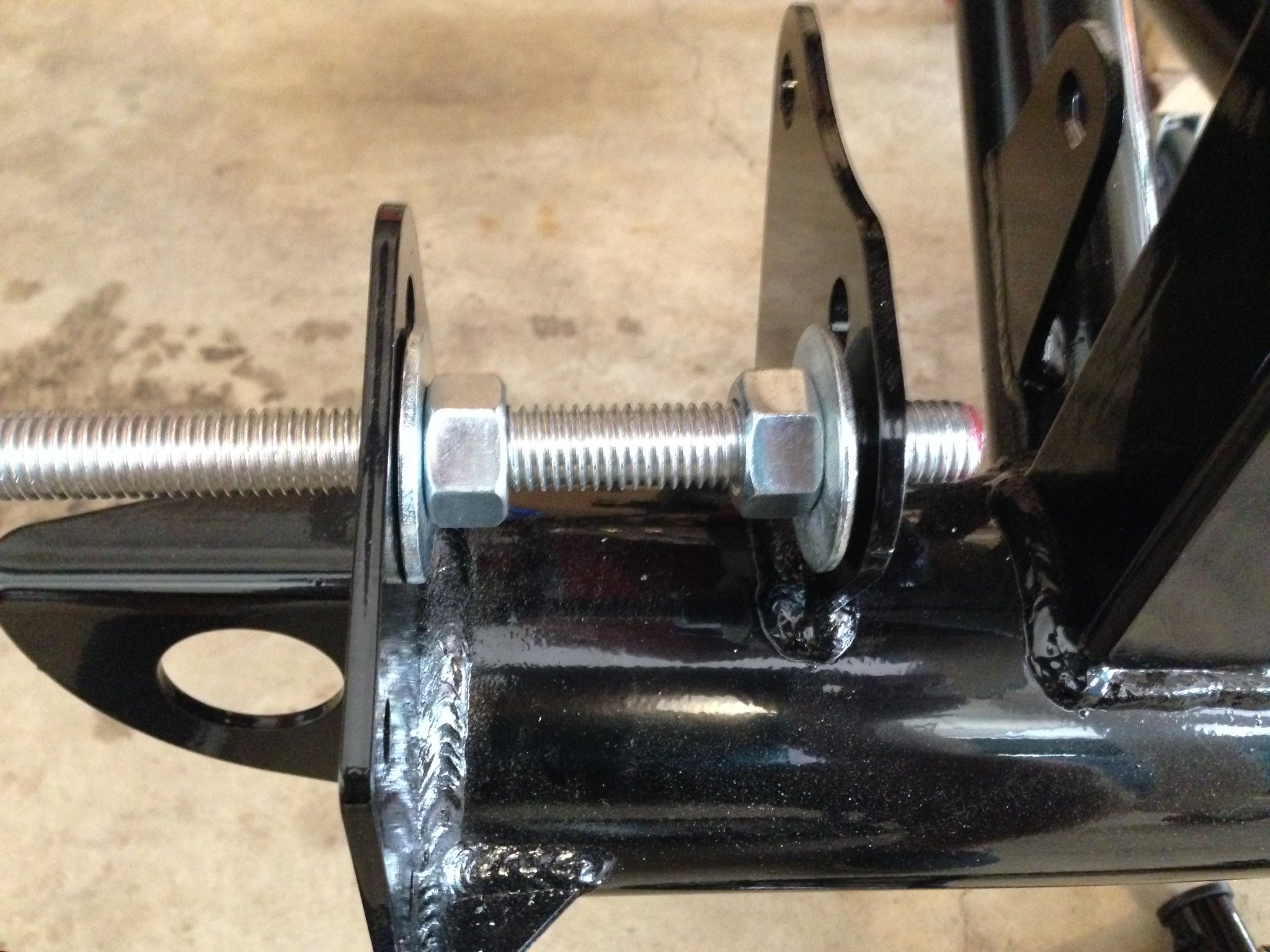 and spread until I went from this: 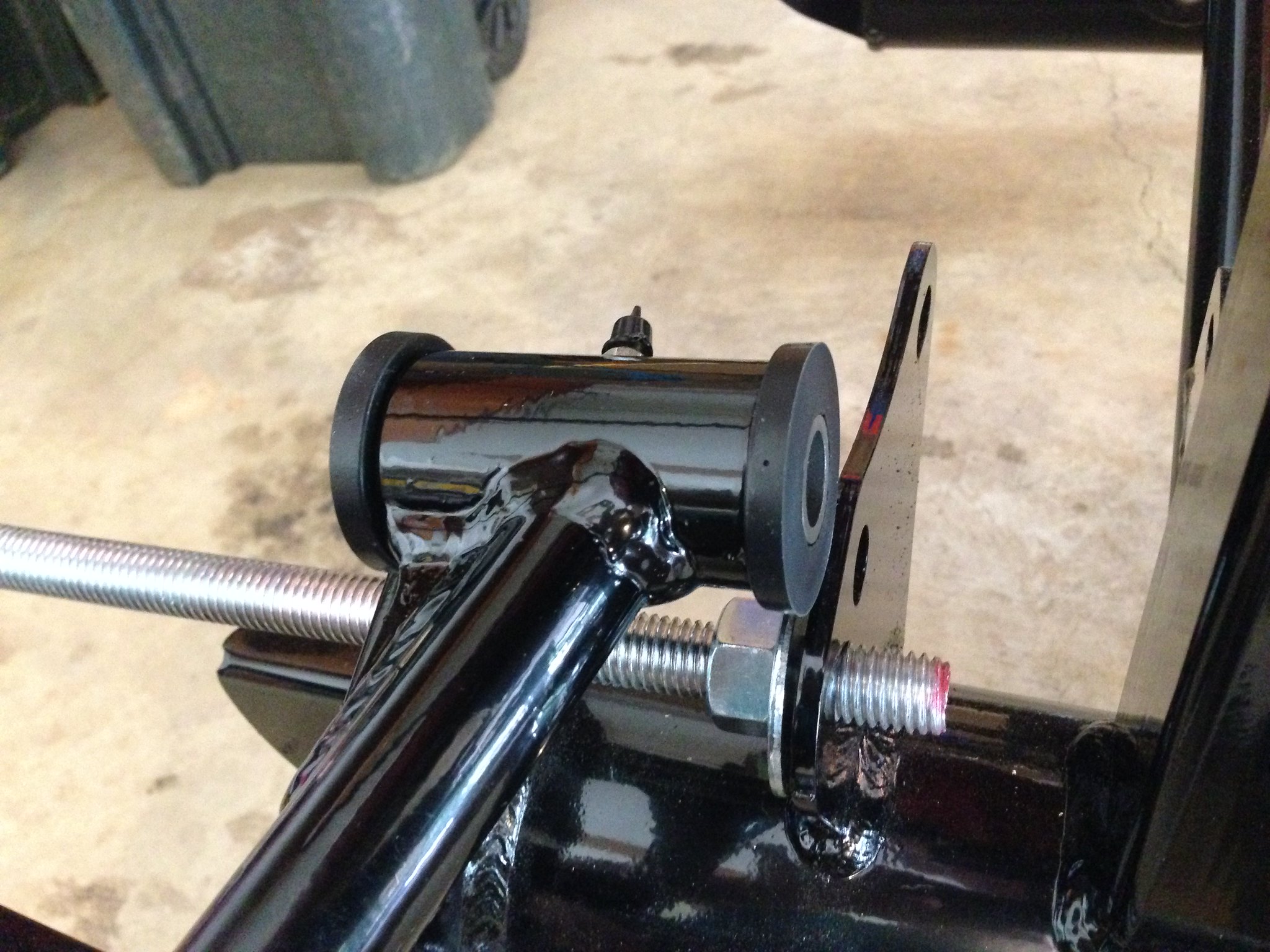 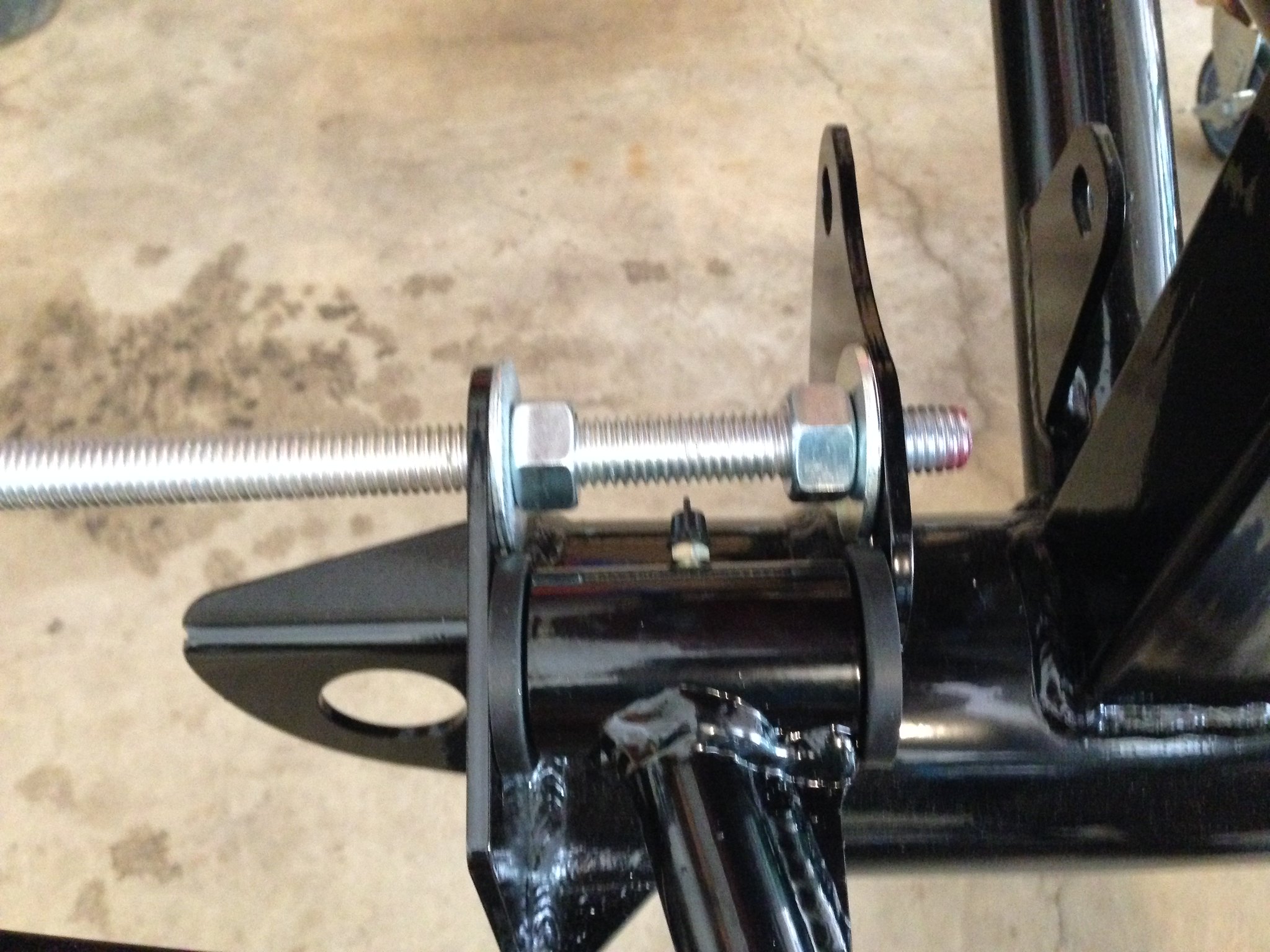 Now I’m just waiting for Breeze to deliver a set of front lower control arm bushings. They’re slightly smaller in diameter (for purportedly better grease flow around the inside of the busing) and slightly longer to prevent the brackets from pinching the bushing. After they arrive, I’ll use them to push the stock bushings down slightly so I can cut radial grooves on the bushings so that grease can travel throughout the bushing (i.e., make the ends of the bushings look like the ones for the front upper control arms).

I keep some black gloss around to repair any dings or peeling that occurred in the powder coating.

I purchased some artist's paintbrushes (cheap ones at the local hobby store) to make the touch up easier.

Joined Jul 12, 2014
·
1,147 Posts
Today I safety wired both front rotors to their hats. It took ten attempts to get six wirings with which I was happy on the first wheel, but then I got the hang of it, and went six for six on the second. 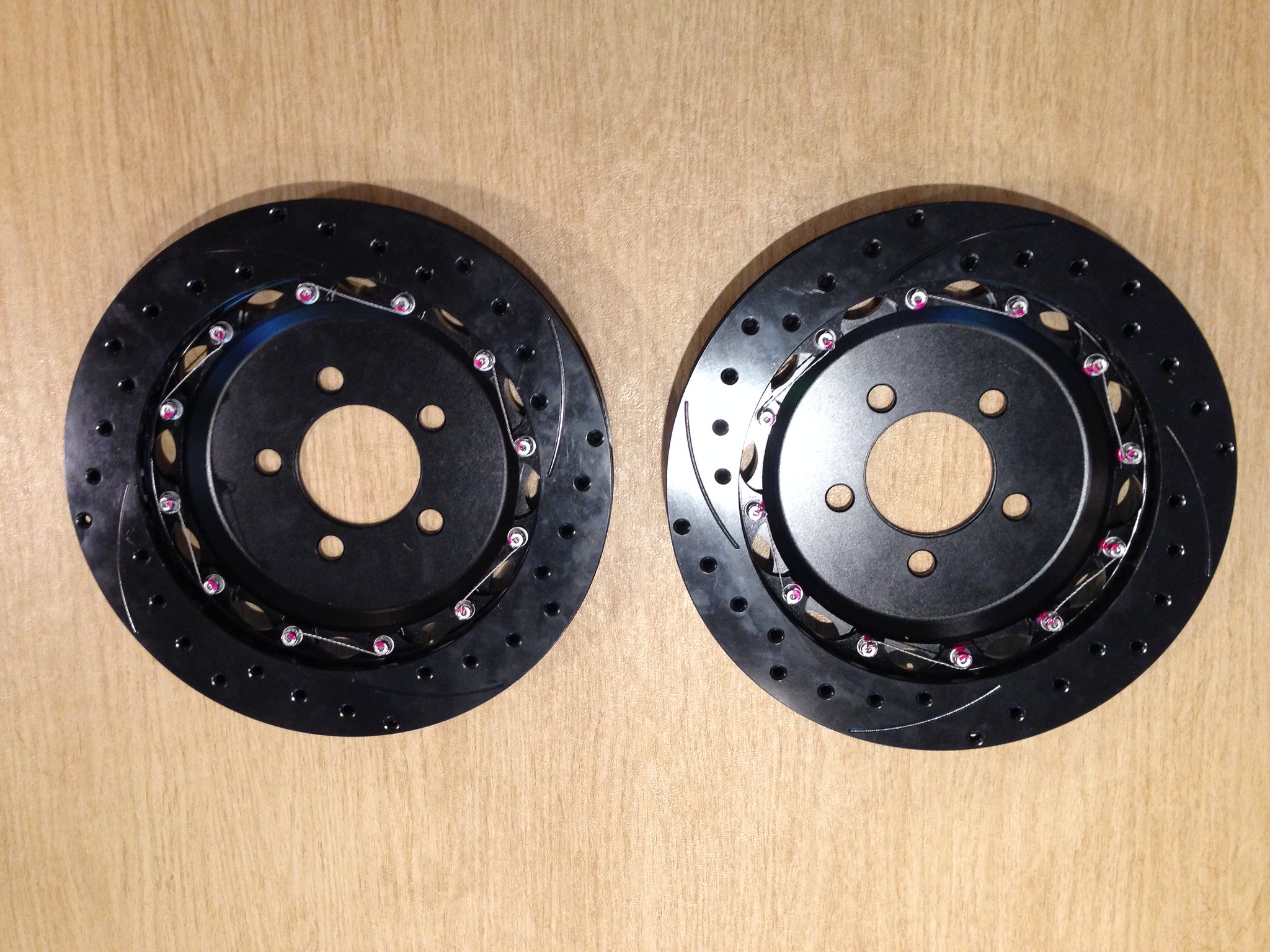 Safety wire pliers are a must for this job. I also found a small pair of needle-nose pliers to be very helpful for getting the wire started through the tiny little holes, and a pair of beefy wire pliers were helpful tugging the wires tight.

Nearly 30 years of rock climbing have given me calluses on my finger tips about a quarter inch thick. I haven't felt a keyboard when typing since ~1990.

Joined Jul 12, 2014
·
1,147 Posts
Today I replaced the front lower control arm bushings with these from Breeze:

The first step was to remove the old bushings. I did this using the new bushing to push against the in-place old and then tapping it with a hammer until it was out about an inch. I then used a screw driver to push the old bushing out a little more, and pulled it the rest of the way by hand. 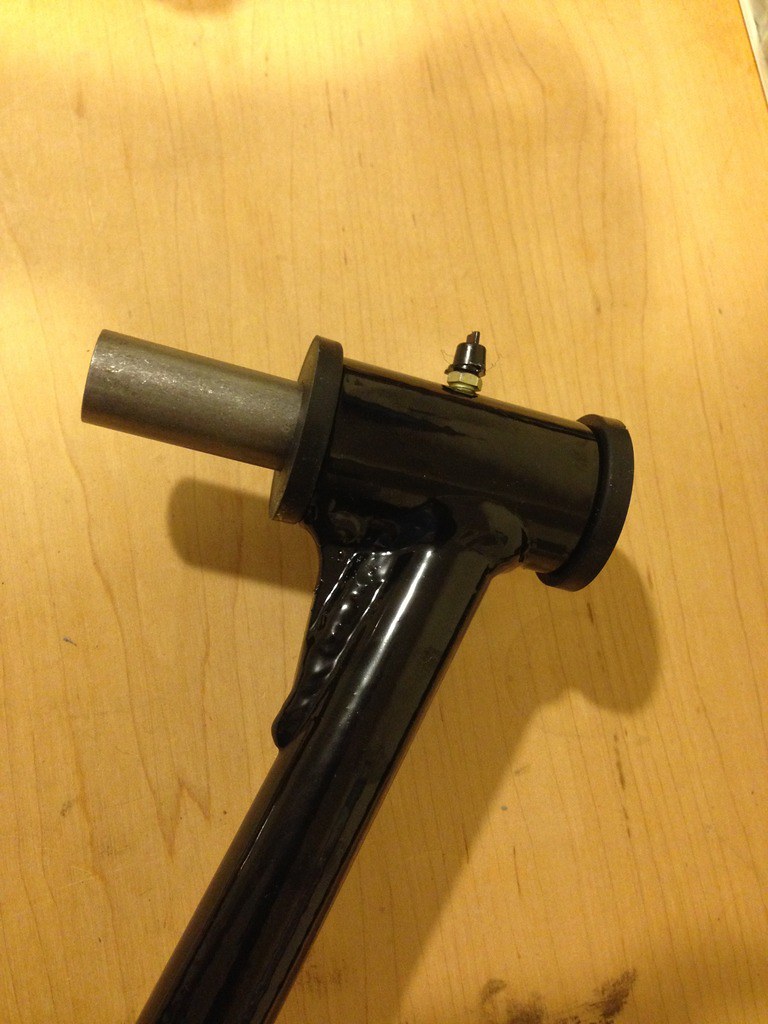 Next, I removed the polyurethane bushings. They pulled easily by hand (well, kind of). 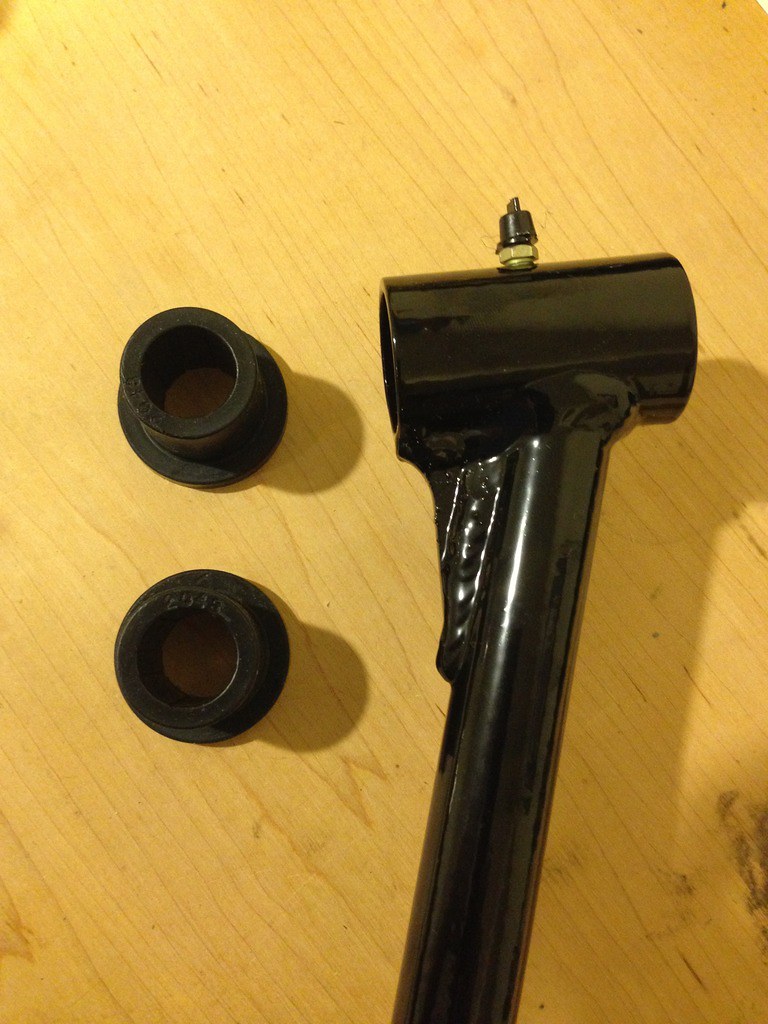 Next, I milled radial channels in the ends of the polyurethane bushings (a tip from Build School). I used a vise to hold the bushing just tight enough to keep it from rocking, and stuffed a paper towel inside the bushing to keep as much dust out as possible. 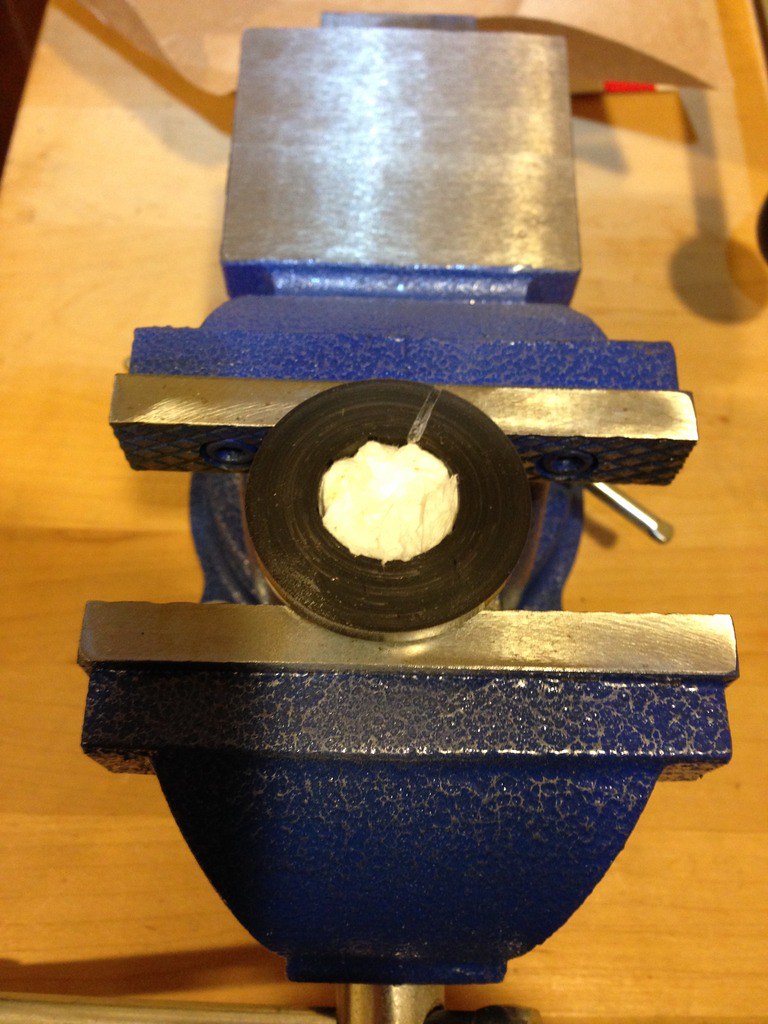 A few light touches with the Dremel, and I had my channels. 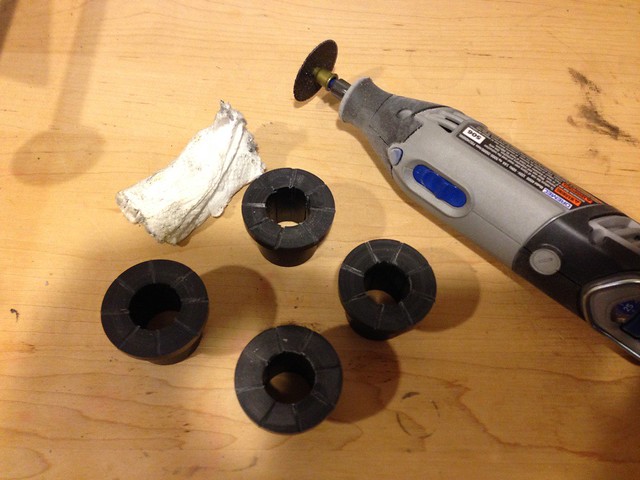 After that, I washed the bushings in soap and water to remove any polyurethane dust.

After test fitting the new bushing tubes in the control arms, I determined that I needed to sand the powder coat off the front control arm pivot (step 5 in the Breeze installation instructions). I did that, and test fit the arms onto the frame. That revealed just how large a gap there is at the back bracket. I’ll drill out the F5 spacer to slip over the rear bushing tube, and then do what I hope is a final mock up.

Today I successfully completed the front lower control arm mock up. left side: 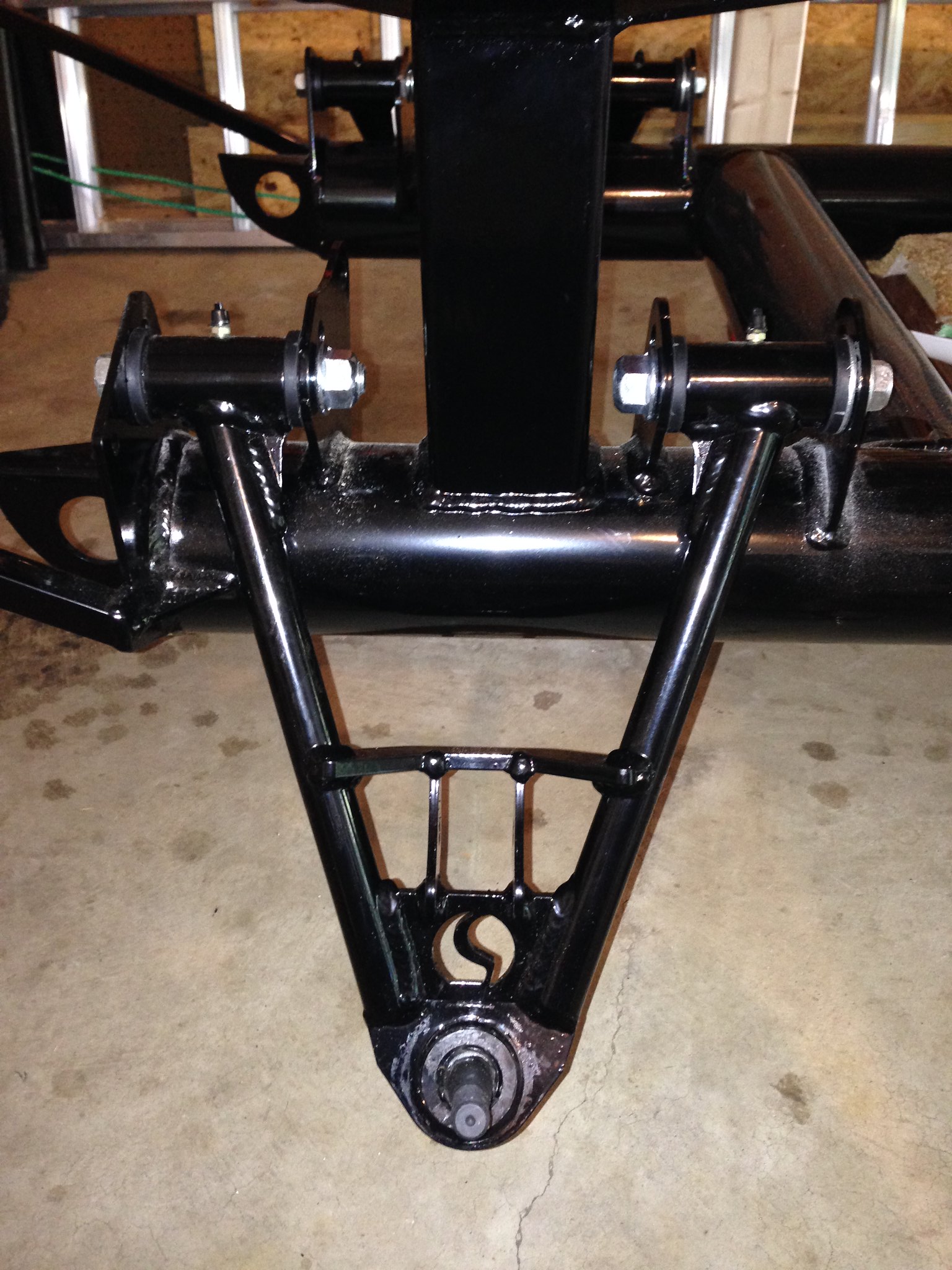 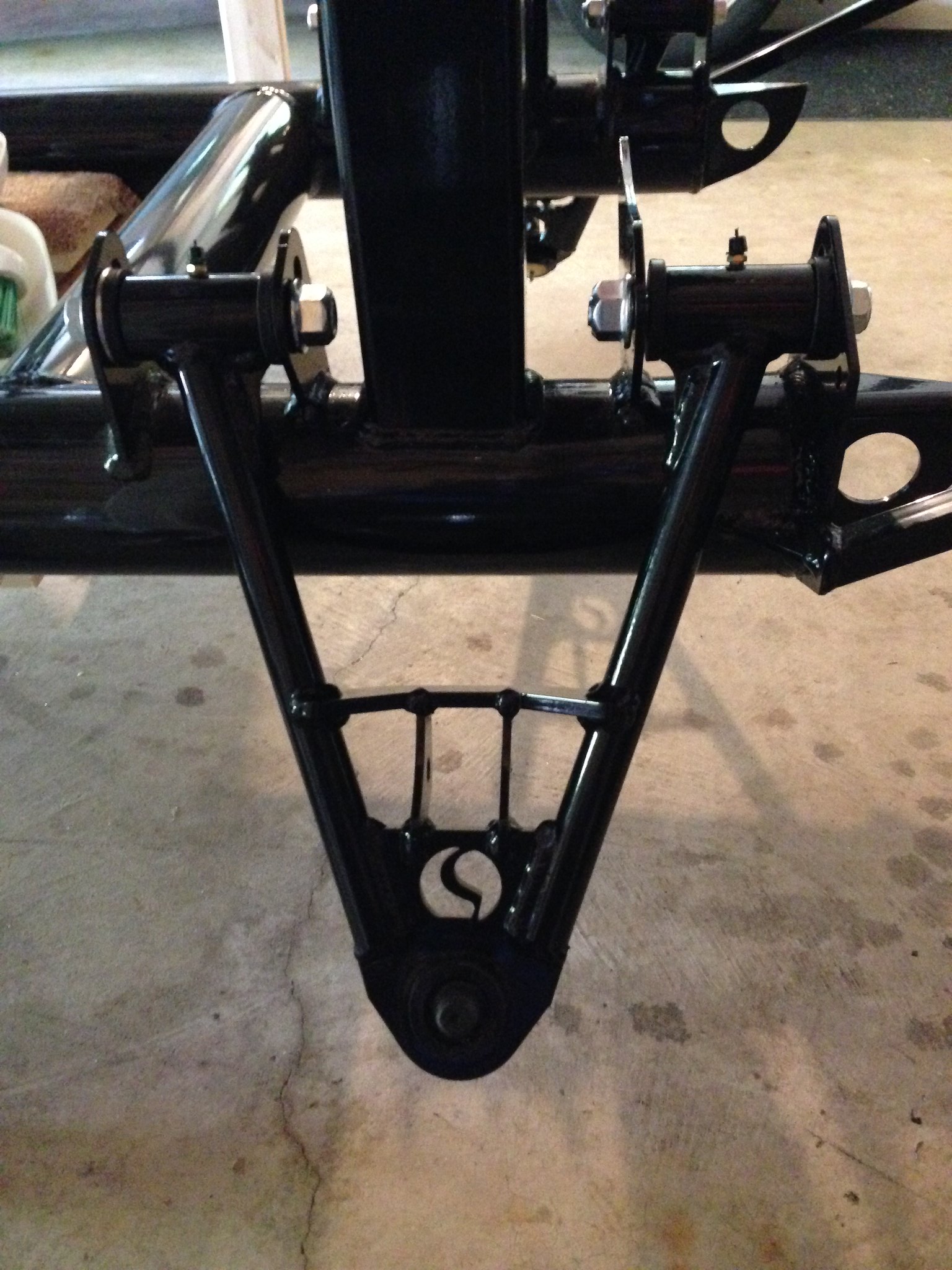 I also put the ball joints (Mavotch Model #MK772) into the front upper control arms. I had to use a couple of wire brushes on the threads (one for the joint and one for the mount). Even then, the ball joints put up some resistance, but nothing I couldn’t handle by using my vise as a great big wrench (tighten a quarter turn, release joint, turn assembly, grab joint…repeat about a hundred times). I dry fit them almost all the way tight to make sure I could complete the job, and then took ‘em apart and used Red Loctite 272 on final assembly. I will tack weld them later. 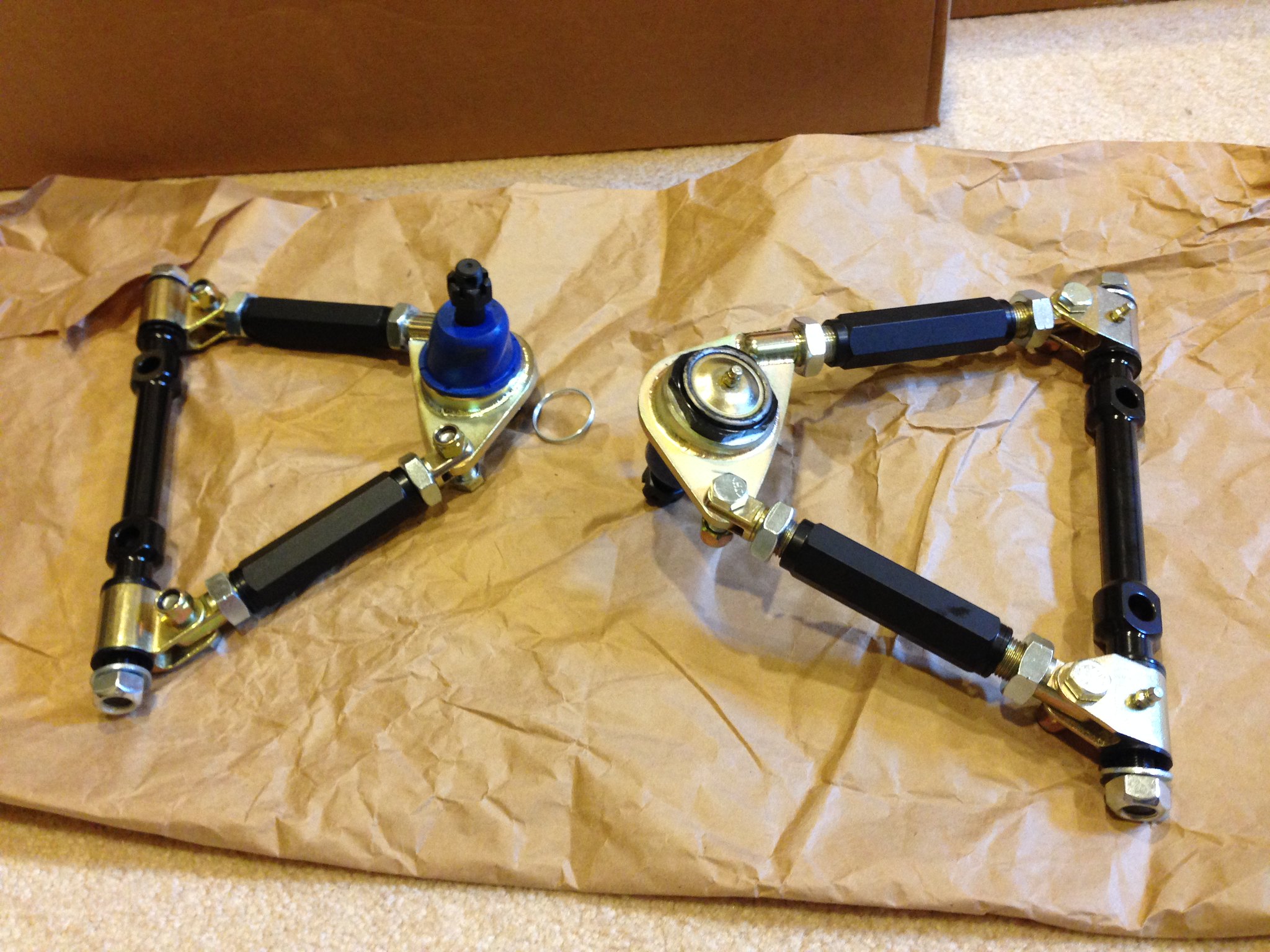 It felt really good to bolt the first pieces onto the frame, even though nothing is torqued down yet (I’ll wait to see how the upper control arms & spindles fit before that milestone).

On the plus side, I get to take the kids fishing. There are very few things so fun as watching little kids catch bluegills using hot dogs for bait.

I spent all last week at the beach, and the first half of this week as Chief of Operations, Camp Dad. I found out that I am truly not a beach person (let’s just say that the New York Times Crossword Puzzle app got a tremendous workout), and that two 7-year-olds, a 6-year-old, and a 4-year-old make for a noisy combination.

Today, however, I had a little bit of time to work on the car. Friend CraigS tack welded the ball joints into my upper control arms; thanks Craig!

Then it was a simple matter of loosely bolting the upper control arms into position. 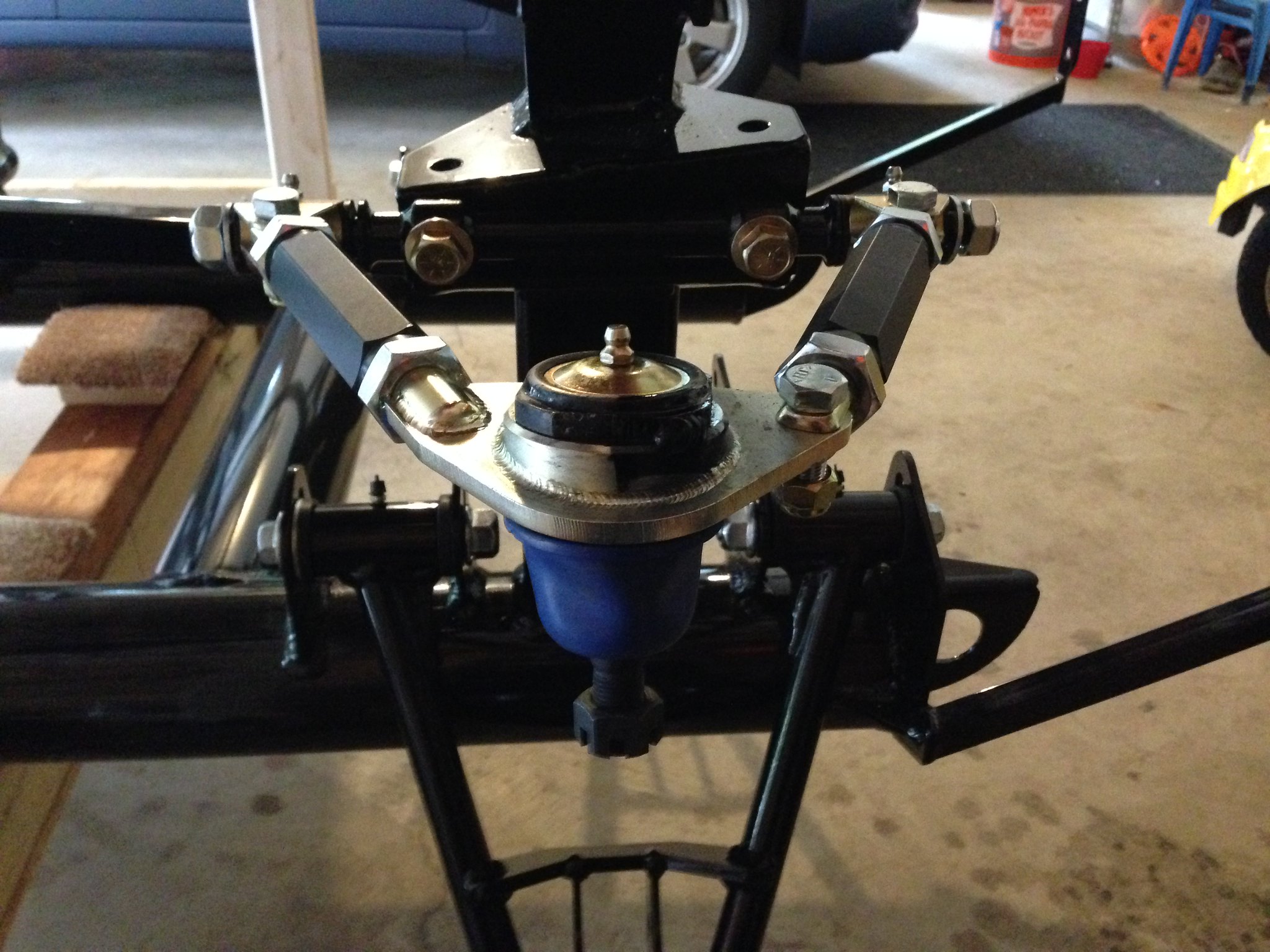 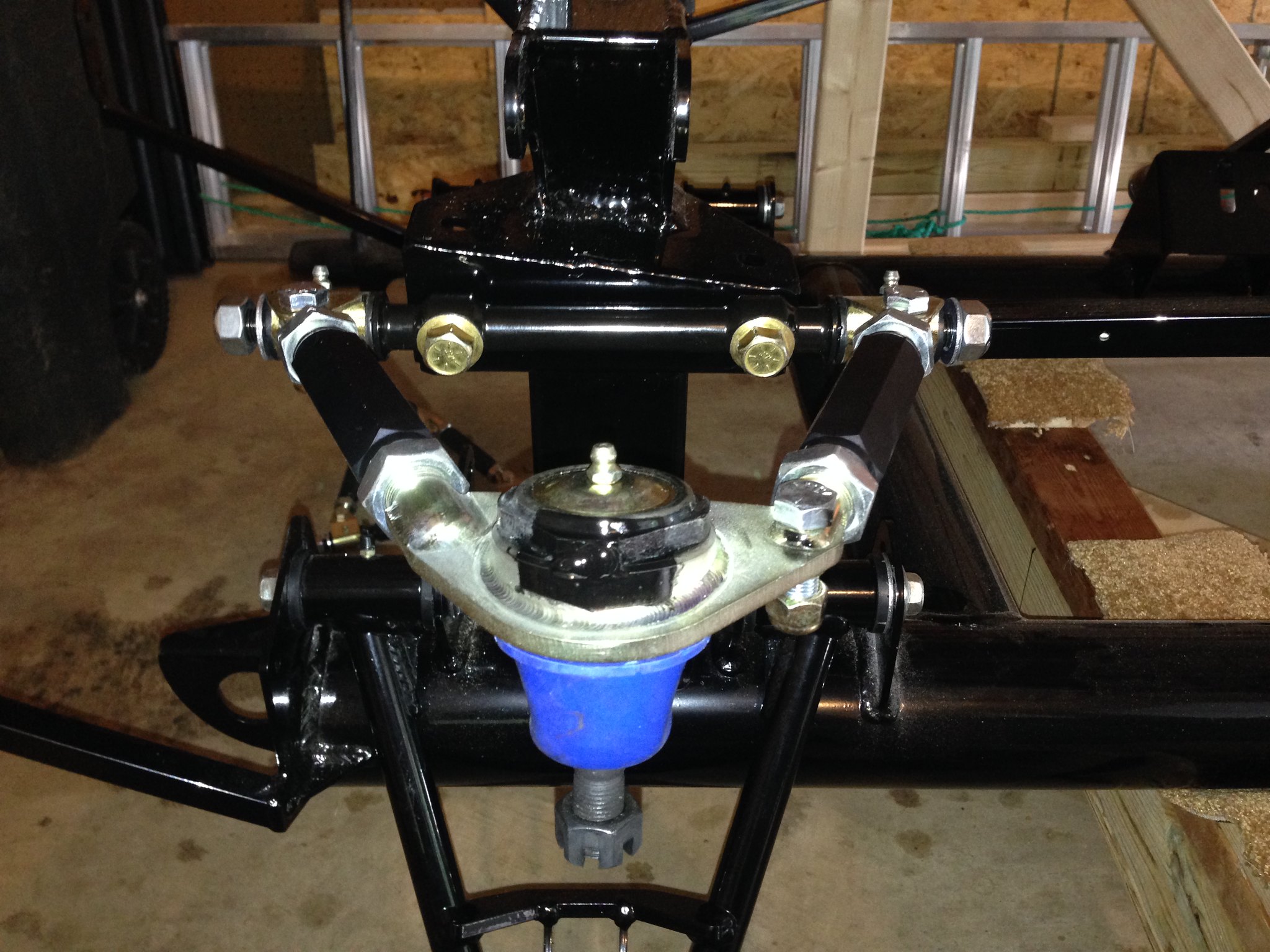 Next I test fit the shocks. The upper mounts were easy: 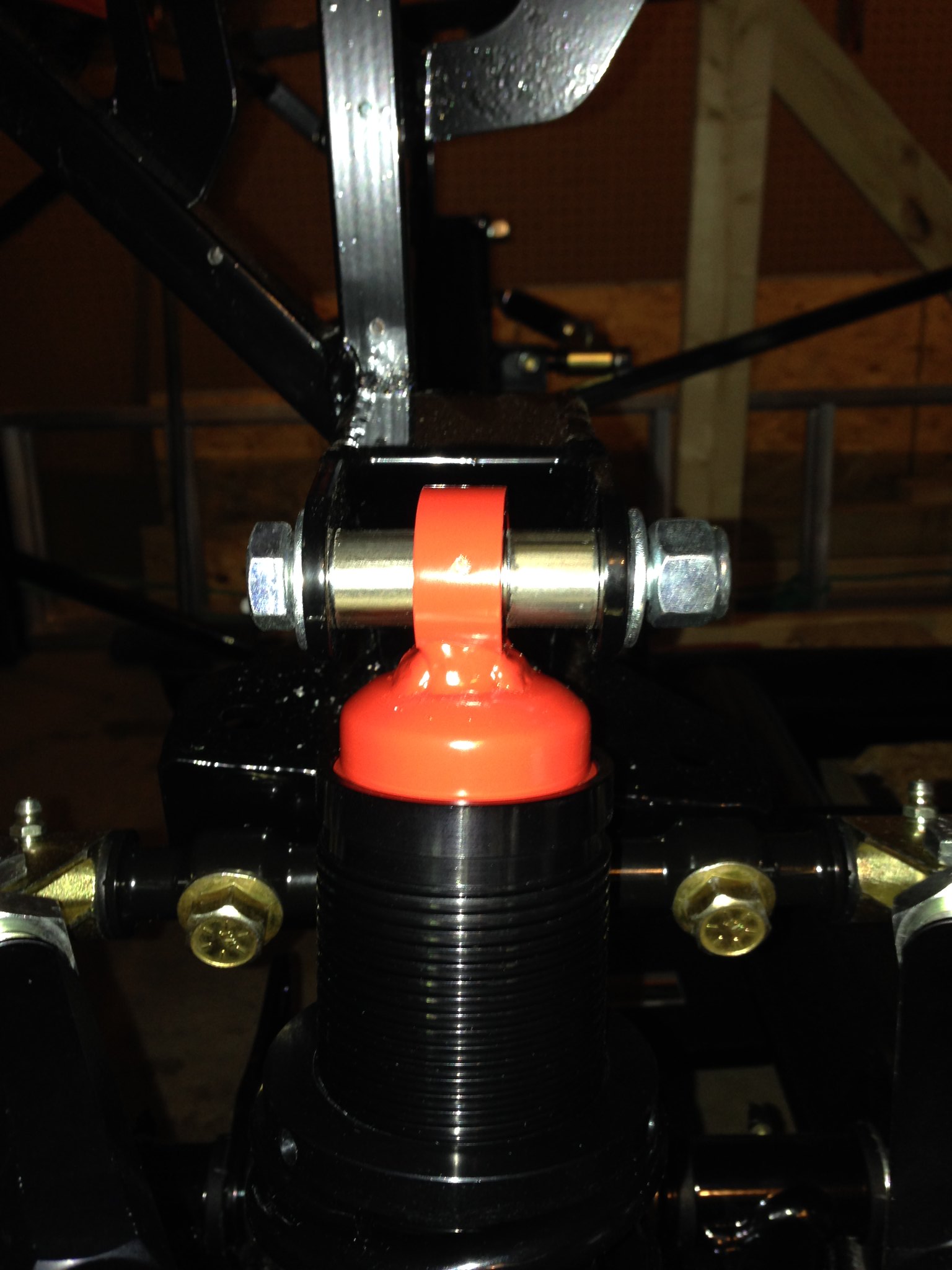 The lower mounts took some work. The spacers were just a tiny bit too wide (a common issue with the complete kit). A few strokes with a file convinced me that I needed to use a grinding wheel. After a couple of seconds with the wheel, I was in business. 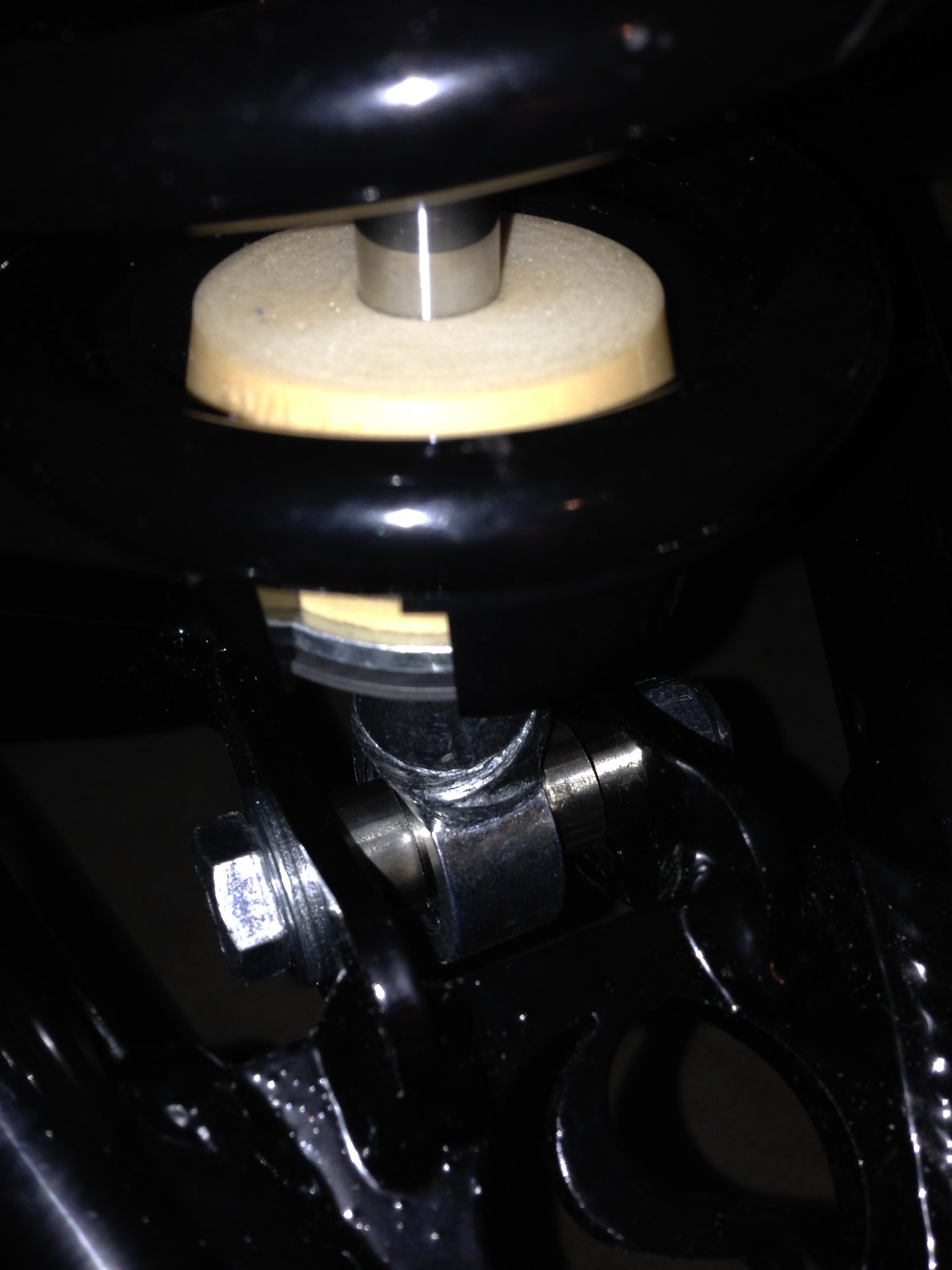 All in all, this was a great day.

Yep. I'm a huge fan of edwardb. I've read each of his build logs, and found them to be among the most informative. And after reading his post on F-panels & rivnuts yesterday, I ordered a rivnut tool. I'll be notching those upper corners shortly.

One of the tips I took away from Build School was to install the transmission A-frame mount early. So that’s what I did today.

The first issue I ran into was that none of the mounting bolts would go through their holes. No problem; I used my drill to clear out the powder coating from the hole and the bolts slipped right in.

The second issue I ran into was that the weld at the end of the leg on the passenger side of the A-frame interfered with the 4” tube. Again, no problem; a couple of trips to the grinding wheel and I was back in business. 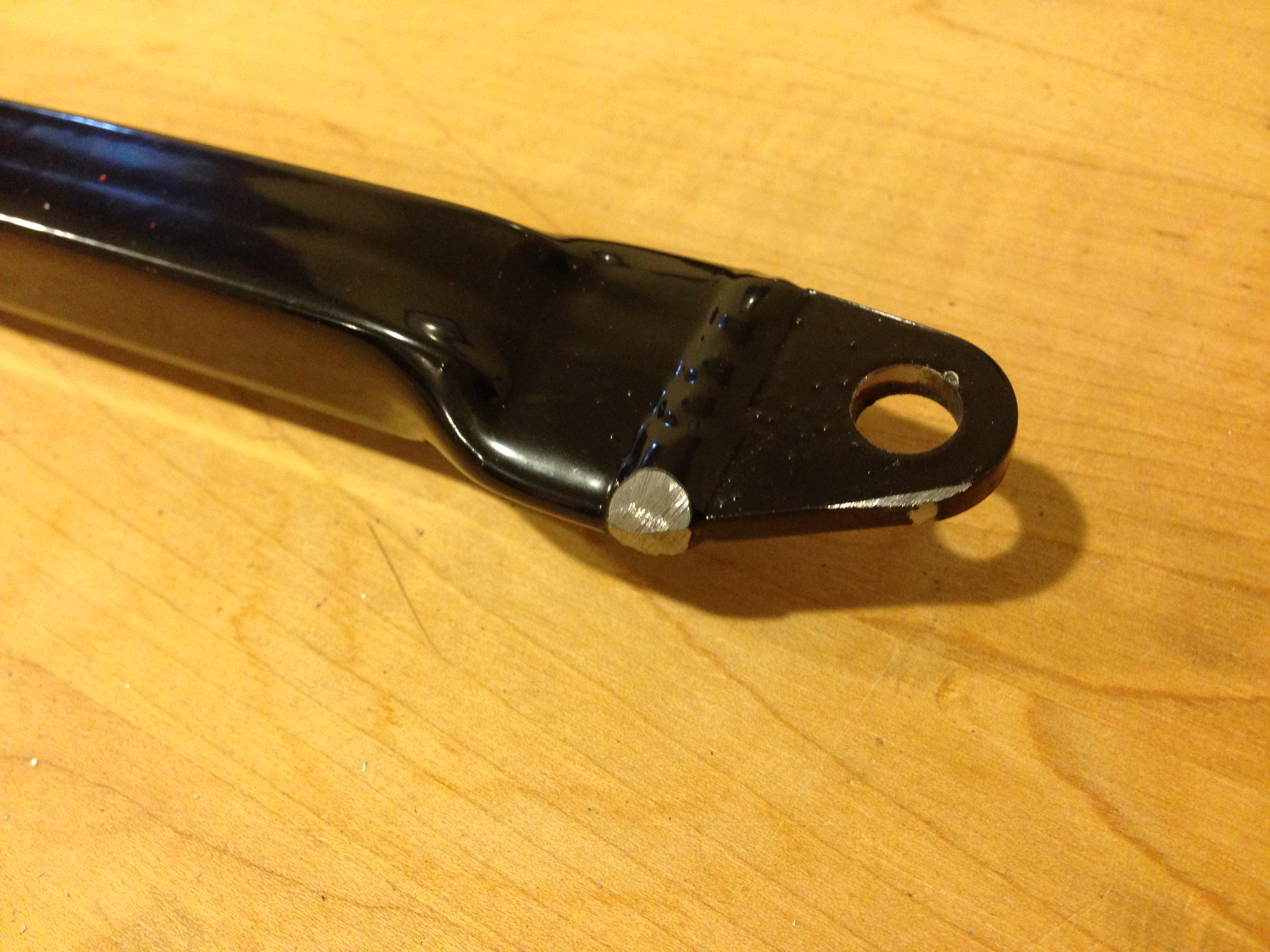 Tomorrow I’ll get some black rattle can paint and touch up the area I ground down. Then I’ll mount the A-frame permanently.

If I’d followed the manual’s sequence and tried to mount the A-frame after the drive train was installed, I’d have been plenty frustrated.

phileas_fogg said:
...
If I’d followed the manual’s sequence and tried to mount the A-frame after the drive train was installed, I’d have been plenty frustrated.

Go ahead and try it that way John but I think you'll find installing the engine and trans with the A frame in place to be even more frustrating. I've been down this road a time or 10---my method is to have the back of the car high, the front low and the engine & trans hanging on a leveler with the tail down. Send it in from the front and after the trans is in the tunnel you start adjusting the leveler to raise the rear as you let the engine down while moving the whole assembly rearward. I can do this by myself in 5 minutes. If the A frame was installed this would be virtually impossible.